Submitted by The Blakeley Group, Inc. on February 27th, 2022

The long-term valuation of the market is commonly measured by the Cyclically Adjusted Price to Earnings ratio, or “CAPE”, which smooths-out shorter-term earnings swings in order to get a longer-term assessment of market valuation.  A CAPE level of 30 is considered to be the upper end of the normal range, and the level at which further PE-ratio expansion comes to a halt (meaning that further increases in market prices only occur as a general response to earnings increases, instead of rising “just because”).  The market is now above at that level. 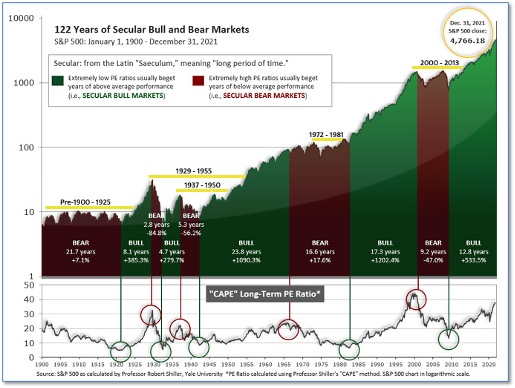 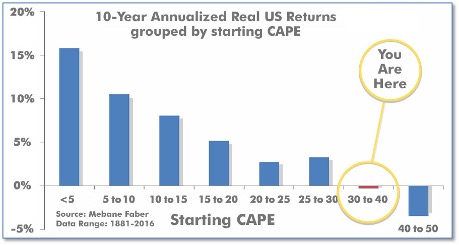 Note:  We do not use CAPE as an official input into our methods.  However, if history is any guide - and history is typically ‘some’ kind of guide - it’s always good to simply know where we are on the historic continuum, where that may lead, and what sort of expectations one may wish to hold in order to craft an investment strategy that works in any market ‘season’ … whether the current one, or one that may be ‘coming soon’!

Commodities:  Commodities finished the week solidly to the upside.  Gold rose 0.9% to $1828.60 per ounce, while Silver gained 1.8% and closed at $23.35.  Crude oil rose for a second week.  West Texas Intermediate crude oil added 1.9% finishing at $75.21 per barrel.  The industrial metal copper, seen by some analysts as a barometer of global economic health due to its wide variety of uses, closed up 1.6%.

U.S. Economic News:  The number of people filing new unemployment claims declined last week, remaining near 52‑year lows.  The Labor Department reported 198,000 people applied for first-time unemployment benefits last week.  Economists had expected a reading of 205,000.  The extremely low number of people applying reflects the reluctance of businesses to lay off workers when qualified labor is so hard to obtain.  New filings rose the most in New Jersey, Pennsylvania, Michigan and Ohio.  Claims fell the most in California, Texas, and Virginia.  Meanwhile, continuing jobless claims, which is the number of people already receiving benefits, dropped by 140,000 to 1.72 million.  That number has now returned to pre-crisis levels.

For the third consecutive month, the rate of home-price appreciation slowed according to the latest report from Standard & Poors.  The S&P CoreLogic Case-Shiller 20-city price index, which covers 20 major metropolitan areas in the U.S., posted an 18.4% year-over-year gain in October.  While impressive, the reading was down from 19.1% the previous month.  On a monthly basis, the index increased 0.8% between September and October.  More broadly, the Case-Shiller national home price index showed a 19.1% annual gain.  This was down 0.6% from its previous reading.  Still, the reading represented the fourth-largest annual increase in home prices over the 34-year history of the data.  Phoenix once again led the country in terms of home-price growth, with a 32.3% increase, followed by two Florida cities, Tampa and Miami.  Economists don’t expect this level of price appreciation to continue.  CoreLogic Deputy Chief Economist Selma Hepp wrote, “Unfortunately, the rate of home-price growth will be limiting for many young buyers who have yet to accumulate sufficient equity gains, and an expected increase in mortgage rates next year will present further challenges.  Together, these two factors will keep a lid on continued home-price acceleration.”

In fact, these factors may already be weighing on the sentiment of home buyers.  The National Association of Realtors (NAR) reported pending home sales, in which a contract has been signed to purchase a home but the deal has not yet closed, decreased 2.2% in November compared with October. Economists had expected a 0.8% increase.  Compared to the same time last year, pending sales were down 2.7%.  By region, every region reported a drop in signings.  The Midwest logged the largest decrease with a -6.3% decline.  Lawrence Yun, chief economist at the NAR wrote, “There was less pending home sales action this time around, which I would ascribe to low housing supply, but also to buyers being hesitant about home prices.”  Danielle Hale, chief economist at Realtor.com, felt the decline was due primarily to seasonal factors, saying sellers were likely waiting until spring to list homes for sale.

In the greater Chicago-region, economic activity grew a bit faster in December, despite the spread of the latest ‘Omicron’ variant of the coronavirus.  The Chicago Business Barometer, also known as the Chicago PMI, rose to 63.1 in December from 61.8 in November.  Economists had forecast a reading of 62.  The latest reading shows the region’s economy remains robust.  While readings above 50 signal growth, analysts consider readings above 60 exceptional.  Analysts view the Chicago Business Barometer as a good indicator of the state of manufacturing and the broader U.S. economy.  The one negative in the report: employment fell again to its lowest level since June, reflecting the ongoing labor shortage in the U.S.  “Firms stated that finding new hires to fill empty positions is challenging,” the report said.

International Economic News:  Statistics Canada (StatCan) reported real gross domestic product increased by 0.8% in October.  Gains for the month were seen across most sectors, including manufacturing where a robust 1.8% rebound more than made up for September’s contraction.  StatCan stated total economic activity now sits just 0.4% below pre-pandemic levels recorded in February 2020.  Furthermore, preliminary data shows data for November suggests a further rise in GDP of 0.3% for that month.

Across the Atlantic, Britain’s economy is set to outpace every other nation in the G7 next year according to analysts at the International Monetary Fund (IMF).  The IMF reported Britain’s economy is expected to grow 5% in 2022, higher than the 4.9% expected for the global economy.  In addition, Goldman Sachs economists forecast the U.K. economy will jump 4.8% next year.  That reading easily trumps the 3.5% predicted for the U.S., 4.0% for Germany, and 4.4% for France and Italy.  Britain formally left the EU on January 1, 2021 and, since then, output has surged by almost 7% as the country battled back from a deep recession.

On Europe’s mainland, French President Emmanuel Macron warned the French people of tough days ahead amid a spike in coronavirus infections and pledged to continue helping businesses affected by the pandemic.  “The coming weeks will be difficult, we all know that,” Macron said in his New Year’s national address from the Elysee Palace in Paris.  The coronavirus surge, with a daily record of 232,200 new infections reported this week, has become a challenge for Macron four months before the presidential election.  He cited cultural venues, tourism and sports as sectors facing the “economic consequences” of the virus resurgence.  “We will help them as we must do and as we have been doing since the beginning of the pandemic,” Macron said.

With energy prices already on the rise and increased tensions between Europe and its key gas supplier Russia, Germany made the controversial “green” decision to shut down three of its nuclear power plants this week.  The closure of the plants in Brokdorf, Grohnde, and Gundremmingen, will cut in half Germany’s nuclear power capacity and reduce its energy output by around four gigawatts—equivalent to the power produced by 1,000 wind turbines.  Germany is planning to completely wind down atomic energy by the end of 2022, when it will shut its final three plants in Neckarwestheim, Essenbach and Emsland.  Europe's reference gas price, Dutch TTF, hit 187.78 euros per megawatt hour in December--10 times higher than at the start of the year.

In Asia, top leaders in Beijing warned at an economic planning meeting this month that China’s economy faces a “triple threat” heading into the new year: shrinking demand, supply shocks, and weakening consumer spending.  “The core problem of these ‘triple pressures’ is still a weakening of demand or insufficient demand,” Wang Jun, chief economist at Zhongyuan Bank, said.  “If demand improves, then expectations will improve.”  Sluggish consumer spending has dragged down China’s economy since the pandemic.  Along with the property market, consumption is one of the two areas economists are most concerned about.  “How consumption recovers next year will have a very great impact on the economy,” Jianguang Shen, chief economist at Chinese e-commerce company JD.com said.

The Japanese economy is expected to accelerate its expansion in 2022, following the sharp turnaround at the end of 2021.  Analysts predict the world’s third-largest economy will see 2-4% growth in fiscal 2022 (starting in April).  After the economy shrank a record 4.5% in 2020 with the coronavirus outbreak, it began to pick up in the fall of 2021 as vaccinations progressed and economic restrictions were lifted.  The government predicts a 2.6% growth in 2021, followed by a 3.2% increase in 2022.  Economists say strong growth is expected especially in the first half of 2022, thanks to restaurants and bars and other hospitality businesses returning to normal operations and the government's stimulus initiatives, including the "Go To Travel" domestic tourism subsidy program which is expected to resume around February.

Finally:  Ever heard of “Click & Collect”?  Visit your local Walmart on any given day and you’ll likely see a row of minivans and sedans with trunks open lining the side of the store and workers loading bins into them.  Initially developed by supermarket chains, this so-called “Click & Collect” service made it possible for consumers to buy online and then conveniently collect their purchases at the nearest store location.  Walmart embraced this business model wholeheartedly, and overtook the grocery stores to become by far the biggest click & collect retailer in the country.  Data from Insider Intelligence shows Walmart scored 25.4% of all click & collect orders in 2021—which translates to an estimated $20.4 billion in sales.  After Walmart, Home Depot is expected to have the second-largest market share for click and collect in 2021, accounting for an estimated 13.3% of all sales through the channel.  Furthermore, Insider Intelligence expects click & collect sales to jump by 21% to $101 billion in 2022. (Chart from cnbc.com) 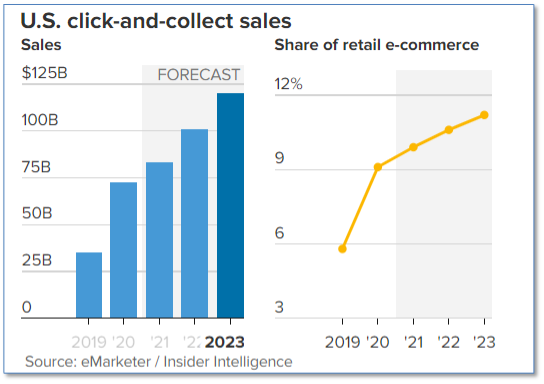